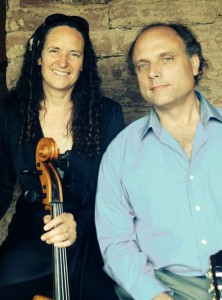 Cellist Michele McCulloch and I have worked together on the art of improvisation since 2013, first in The Convergents, and now as the Raphael Duo.  We never work from charts, pre-arranged chord progressions, or pre-composed melodies.  Instead, we start with a seed of a motif, texture, an extra-musical idea or story, a natural phenomenon like ocean waves or breathing, a mood, or some other point of inspiration.  Then, using techniques of counterpoint, melodic development, form, and harmonic systems of the last few hundred years of music, plus many techniques and ideas of our own, we improvisationally assist in the growth of our seed as it takes on a life of its own and unfolds into a composition.  We never know what the final composition will be until the last note ends.

Come along with us as we explore the World of Art, using our guitar and our cello to capture objects from that magical realm and spin them into sound.

Michele McCulloch began a life long fascination with music at age 4, upon
hearing Beethoven and Burl Ives playing simultaneously. After endless years of
being the pianist for school musicals, she threw herself into hot water by studying
Composition at Sonoma State University, At SSU, she met two extraordinary
teachers who inspired her in wildly divergent ways. Anne Crowden, founder of the
Crowden School in Berkeley, brought passion, energy, hilarity, and class into every
teaching moment. Anne’s chamber music instruction was incomparable. I Wayan
Suweca, founder of the gamelan orchestra Sekar Jaya, a Balinese drummer with
great tenacity and devotion to his art, was also greatly influential. His teaching
opened doors to new worlds of sound, and provided fuel for compositions.
Michele had not counted on falling madly in love with the cello and the gamelan,
but these things do happen. While continuing composition studies with David
Sheinfeld (composer and violinist in the San Francisco Symphony), she discovered
a group of eccentric characters playing Baroque music on original instruments,
something her soul had longed for. She played under Laurette Goldberg in
numerous baroque ensembles and Nicolas McGegan with the Philharmonia
Baroque Orchestra. Since then she has played with various chamber groups, some
locally and some abroad, focusing on early music, music from other cultures,(she
can be spotted rarely playing in Irish pub sessions) or more recently, completely
improvised music with The Convergents and the Raphael Duo.